The go to place for masters cycling in the United Kingdom.

British Masters Cycle Racing is for female and male racers who are at least 40 years of age.

We offer a year-round programme of road, circuit and track races – around 150 races per year.

British Masters Cycle Racing is an independent body proudly established by Percy Stallard and Eddie Cook in 1986 as the League of Veteran Racing Cyclists. Created to provide a programme of competitive cycling events for members aged 40 and over.

We have recently rebranded ourselves with a new identity, logo and website, but the ethos, the spirit of the organisation and the people involved are still the same. The LVRC legacy lives on now in BMCR.

Our membership varies from newbies to World Champions, this is the place for everyone, whatever your ability. Membership does not exclude anyone from joining any other cycling organisation.

Provision of membership and racing is administered on a regional basis, while an Executive Committee deals with policy, and co-ordinates the regional activities. Most of the road races are under 55 miles; there are also some stage races, criteriums, time trials and track leagues.

It is BMCR policy that races are organised on an age-group basis grouped by 5 year age bands. If you’re unsure whether you’re fit enough to race, don’t worry – except for National Championships and Series events, the excellent national Percy Stallard and Le Col / Arcadian / Velopace series for example – you are welcome to compete in an older age group than your calendar age indicates. Then you can move up to your actual age group as fitness builds.

For example if a 42 year old rider feels that they are not up to the standard of that age group then they can ride in a 50+ or even 60+ race. (The only exceptions are Championship events and the national Percy Stallard race and Le Col series.) Conversely riders of masochistic tendencies can opt to race in a younger age group than their calendar age, for more intense competition and longer distance.

This flexible format of age related racing has proven very successful at enabling riders to compete at their optimum level.

In 2019 we have had huge success in running separate women’s races too, with all categories racing together. This is run as part of an EFGH race or when there are sufficient numbers, as a separate race.

run by cyclists for cyclists

Racing for men and women over 40 years of age

Uk-wide race programme throughout the season

regionally-based democratic organisation - you can have an influence

We've Got
What It
Takes -
Take it
From Us!

Rain, hail or shine, good times and bad, take a look at our awesome photos which capture the essence of the British Masters Cycle Racing. 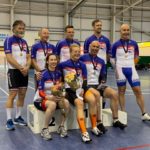